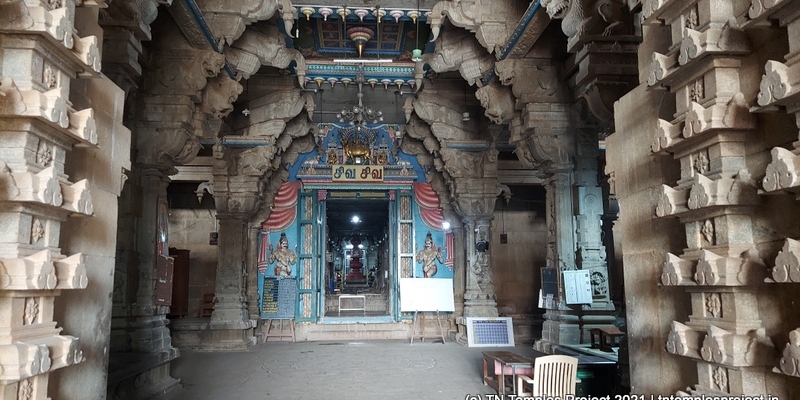 The region we call Chettinad is generally understood to be the region broadly triangulated by Sivaganga, Pudukottai and Ramanathapuram. “Chettinad” or “Chettinadu” itself is more understood as the “Nadu” or land of the Chettiar community.

We spent a week touring the Chettinad region in December 2021, when we visited close to 100 temples in that region. On this trip, I was struck by certain profoundly fundamental aspects of temples in that region – many of which are referred to as Nagarathar temples. This kick-started some extended reading and research, which I thought I could feature here through a process similar to syncretism, for the benefit of our readers. That said, I’m no expert on the subject, so if there are any corrections or revisions required, please let me know.

Before we delve into Nagarathar temples (and indeed, other temples in the region), it is important to understand the history of the people, which itself provides a great deal of information on their culture and practices. While this is not an essay on the ethnography of the Nagarathars, it provides historical context, to help appreciate their involvement with temples.

Kanchi to Chettinad via Poompuhar

It all starts in what was reckoned as perhaps the greatest town of all – Kanchipuram. Kalidasa writes, “Pushpeshu Jati. Purusheshu Vishnu. Nareeshu Rambha. Nagareshu Kanchi” – just as Jati is the greatest amongst flowers, Vishnu amongst men, and Rambha amongst women, so is Kanchi amongst cities.

This hub of Saivism with its hoary past over centuries, if not millennia, was once the home of today’s Chettiars, who lived in Naga-Nadu, on the outskirts of Kanchi. Given this heritage, it is no wonder that the members of this community were extremely devout worshippers of Siva, Sakti and the community favourite: Maragatha Vinayakar.

It is believed that due to some natural calamities – possibly floods or earthquakes – they moved to the area of Kaveri Poompattinam – quite literally, the town where the Kaveri enters (the sea) – modern day Poompuhar, from around the 8th century BCE till the early 8th century CE.

Either because of their hometown of Naga-Nadu, or its proximity to the one and only Nagar – Kanchi – the community came to be called “Nagar-athar”, and it is this name that stuck even during their time in Poompuhar. Another title given to them in Poompuhar was Dhana-Vanigar, or rich / landed businessmen.

In Tamil history, the period from the 4th to the 8th century CE – the time of the Kalabhras – is considered an interregnum, and generally regarded as a “dark period” or “dark age”, since not much by way of history, is known about this time period. One line of thought says the Kalabhras were followers of Buddhism or Jainism, and therefore persecuted or drove out those of other faiths; or the latter simply moved out due to societal pressures. This may be the reason for the Nagarathars to have moved out of Poompuhar, further down south in what was the kingdom of the early Pandyas (ie, before the Cholas came to prominence in the 9th century). They made this their home, due to the benevolence and patronage afforded to them by the Pandyas.

In relatively recent times, members of the community also moved overseas to Sri Lanka and the far east, including countries like Burma, Vietnam, Cambodia, Malaysia and Singapore.

“Chettiar” itself is a corruption of the word “etti”, an ancient Tamil word of respect, bestowed on the members of the trading/business community, possibly by the Pandya kings, when the community moved to the Pandya region of the time.

The term Nattukottai Nagarathar or Nattukottai Chettiar is also often used to denote the Chettiar community, primarily due to their palatial houses – Nattukottai literally translates to Rural-Fort, indicating the size of their houses, which were located outside of the larger cities of the region.

The Chettiar community of the time itself had sub-groups, and while a majority stayed back in the region, some relocated to Nagercoil in Kanyakumari district, and some to the Chera region (and whose history is lost, due to records not being available).

Today’s Chettiars in the region associate themselves with one of nine groups or sects, each known as a pirivu (division) with its own principal city/town and an associated temple. These pirivu classifications are important, as members of a pirivu are considered to have a common patrilineal ancestor, and so a person is not allowed to marry someone within their own pirivu. Each pirivu regards a different Siva temple as its core. Some pirivus have ut-pirivus (sub-clans) as well.

The Siva temples associated with each of the 9 pirivus are often together called the Nagarathar Sivan Koil temples, though that term could (and does) technically apply to any temple maintained by the Nagarathars. These 9 temples are:

Each of these temples is central to the members of the respective pirivu, and so they are not only large, but also very well maintained (this is largely true of most temples maintained by the Nagarathar community).

In the case of these three pirivus, it is permissible to marry someone within the pirivu as long as they are from another utpirivu.

Temple heritage of the Nagarathars

The 9 Nagarathar temples have their own sthala puranam. However, as mentioned earlier, there are several other temples in the region and elsewhere– which are often referred to as Nagarathar koil or Nagara koil, indicating that they are maintained by the Nagarathar community.

One interesting feature of many temples is that they are for Siva as Sundareswarar or Chokkanathar (both meaning and indicating beauty), and Amman’s name is typically Meenakshi Amman. This seems to be a rather templatised naming of the deity, with both deference to and derived from Meenakshi Amman and Sundareswarar of Madurai, the capital of the Pandyas, under whose rule the Nagarathar community flourished after their move from Poompuhar.

Most of these temples are relatively new, and so many do not have a sthala puranam associated with them. From an ethnological point of view, one can almost draw a notional border around the areas occupied by the Nagarathars, by the location of Siva temples for Sundareswarar, Sokkanathar, and / or other similar names.

There are also many temples in the region which are not built by Nagarathars but are maintained by the community. Many of these are much older, and often have names for the moolavar as something other than Sundareswarar or Sokkanathar (or similar). In addition, the community also maintains several temples in the rest of Tamil Nadu, particularly around the Kaveri delta region.

Almost without exception, Nagarathar temples (by which we refer to all temples maintained and run by the community, including the 9 chief temples) have excellent art and architecture on walls, panels and pillars, a special and additional ornamentation to the Natarajar sabhai (sannidhi), and dedicated shrines for Bhairavar, who is a very important deity in their worship practices.

Despite the various customisations as noted above, the Nagarathar temples’ strict adherence to agamic principles is remarkable. One consistent, standout feature that symbolises agamic requirements is that wherever Parvati has a separate shrine as Meenakshi Amman, there is a separate Nandi for Her, in addition to a Nandi facing Siva. This is true only for Meenakshi Amman, and not for other representations of Parvati – in those other cases, only Siva has a Nandi facing Him. This is one way to identify Pandya period temples in other regions (eg, the Naganathar temple in Pozhakudi near Kumbakonam and Mayiladuthurai, a core Chola area as generally known).

Another feature that seems to be more prominent in the Chettinadu region, and perhaps spread from here, is the presence of a darpanam just behind Nandi, in front of the Siva Lingam. The darpanam (Sanskrit for mirror) is a brass object shaped like the sun, held in place by a short post, which is believed to be used by the deity to look at Himself, after abhishekam.

Nagarathars who moved overseas also set up or helped establish temples in those countries.

In bhakti and literature

In the Saivite bhakti tradition, Karaikal Ammaiyar (one of the 63 Nayanmars), as well as Pattinathar (who is associated with the Tiruvidaimaruthur Mahalingeswarar temple as well as several others in that region) are considered to be from the Nagarathar community.

As we visit the various Nagarathar temples on this site, it will be useful to keep in mind some of the aspects mentioned above, to gain a better appreciation of the temples and their respective contexts.