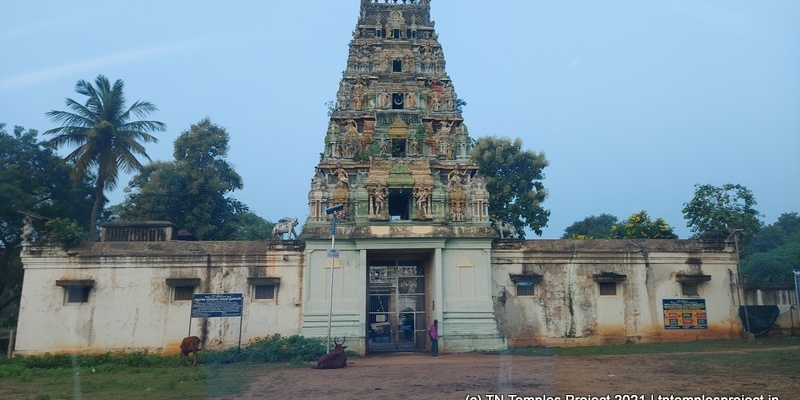 This is one of the 9 Nagarathar temples of the region, which are associated with separate clans (pirivu) of the Nagarathar community.

This temple’s sthala puranam is connected to the sthala puranam of the nearby Mathur Ainootreeswarar temple. Kongana Siddhar wanted to master the art of alchemy, converting iron to gold, using a herbal mix. He worshipped Siva to grant him the power to do so, and Siva asked him to worship Bhairavar at Iluppai Vanam (this was a forest of Iluppai trees, at the time). The siddhar did as advised, and got the power to create gold. Immediately, he created some gold, but when he tried to lift it from the ground, the gold disappeared, and was instantly replaced by a brightly shining Siva Lingam. Since the Lingam was self-effulgent, Siva came to be known as Swayam Prakaseswarar (the Sanskrit name) and Thanthondreeswarar (self-appearing, in Tamil).

The Bhairavar that the siddhar worshipped is present in this temple as Swarna Akarshana Bhairavar, depicted with two dogs – one standing and one seated – and also an Akshaya patram instead of the customary begging bowl / skull. Naturally, worshipping Bhairavar here is regarded as a way to obtain wealth and prosperity in life.

One of the pillars also features a bas relief of a dog, which locals pray to, for relief and protection from dog bites, which are said to be otherwise common in this region.

In addition to the depiction of Bhairavar, the temple features some superb examples of masterful or unique craftsmanship. Dakshinamurti in the koshtam is depicted with a crown, which is rather unusual. On one of the pillars in the mandapam features a miniature bas relief Vinayakar, called Kutti Vinayakar, who is about 1 or 1.5 inches tall, but depicted beautifully and clearly. There are other similarly brilliant miniatures in the southern part of the garbhagriham koshtam, which features Vinayakar, and old lady with a walking staff, and Kamadhenu pouring milk on a Siva Lingam – each of these is less than 2 inches tall!

Amman is depicted with a tiruvachi or prabhai / halo around Her head, and Varahi is depicted on a pillar outside the Amman shrine. Varahi is worshipped for safe childbirth and delivery.

In the koshtam are Vinayakar, Dakshinamurti, Lingodhbhavar, Brahma and Durga. in the inner prakaram are shrines for Vinayakar, Perumal, Murugan with his consorts Valli and Deivanai, Chandikeswarar, Gajalakshmi, Sani, a separate Bhairavar, Chandran and Suryan. There is a separate Navagraham shrine. The Natarajar shrine is also beautifully decked out.

In the 9 Nagarathar temples, no deity other than the parivara devatas are installed inside the temple, except at Ilayathangudi and Mathur, where Ananda Muneeswarar – a guardian deity – is present.

Please do read this Overview on Nagarathar heritage and temples, in connection with temples in the Chettinadu region.