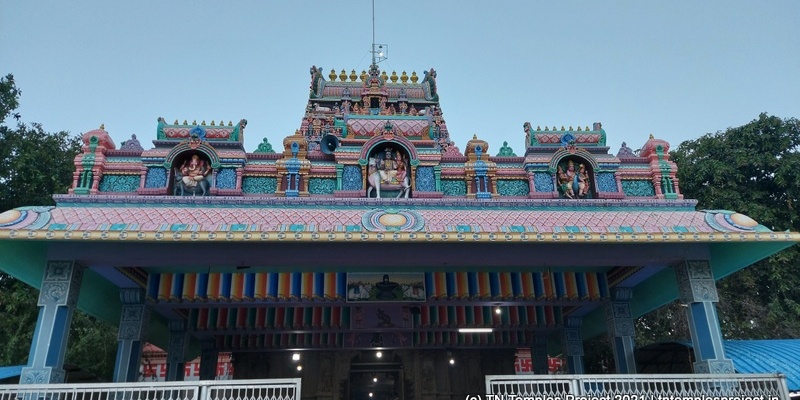 Pillaiyarpatti in Sivaganga is synonymous with the Karpaga Vinayakar temple, but there are two other important shrines in the temple. The temple is primarily for Siva as Marutheeswarar, along with Parvati as Vadamalar Mangai Amman. The other important shrine here is of Natarajar as Tiruveesar, with His consort Sivakami Amman.

The only known puranam about this temple is that Kubera has worshipped here. The temple is one of the 9 Nagarathar temples, ie, ancestral temples of the Nagarathars, established by tradition in the year 714 CE.

The temple is said to have been built during the so-called “dark ages” when the Kalabhras were in power (that is, prior to the Pallava period), and so not much is known about the history of this temple, except that the stapathi for the temple was named Ekkatukkoon Perunthachan. Later additions to the cave temple are from the Pallava period, specifically in the time of Narasimhavarman, from the mid-7th century. Subsequently, the temple was renovated by the Pandyas.

While the famous rock-cut bas relief of Karpaga Vinayakar faces north, Marutheeswarar faces east, and Vadamalar Mangai Amman faces south. This shrine of the moolavar and Amman are dated to the 7th century.

Between the Vinayakar and Siva shrines is an unusual bas relief of a person in human form, with two attendants. This has been interpreted by experts very differently, including as a king, Harihara (half Siva, half Vishnu) and Ardhanareeswarar. The absence of any emblems or symbols (which is almost de rigueur for such types of sculptures) makes the possibility of this being a king, remote. In that case, this should be either Harihara or Ardhanareeswarar, which by itself is very rare and unusual.

The temple features classic Nagarathar art, architecture and ceiling paintings. The architecture on the pillars and walls are extensive yet intricately done, yet follow the agamic and Shilpa shastra rules.

There are several inscriptions in the temple – inside the rock-cut shrines as also on the walls and mandapam outside. These mostly refer to the Vinayakar here, but also help date the core of this temple. One particular inscription of note is the one that features elements of Tamil Brahmi and Vattezhuthu. Other inscriptions of importance include some from the 11th to 13th century, which establish the legitimacy of the Nagarathar community over the trusteeship of this temple.

Other koshta deities and parivara deities have their usual shrines. Many of these shrines, as well as the maha, alankara and Tirumurai mandapams, are additions over various periods of time after the 7th century. The sapta matrikas are enshrined separately, in what is called the Sakti sannidhi.

Please also read this overview on Nagarathar heritage and temples, to get a wider view of temples in the Chettinadu region.

During the Tamil month of margazhi (December-January), the temple opens at 4 or 4.30 am, in order to accommodate the increased number of devotees during this period. This is true of the majority of temples in Tamil Nadu and this region as well.