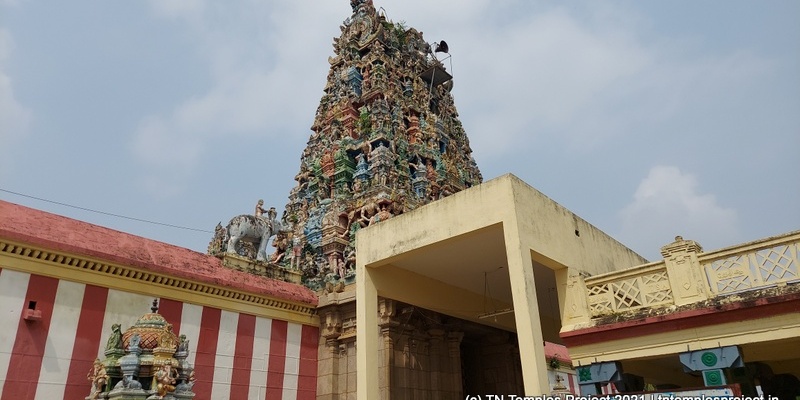 This is one of the 9 Nagarathar temples of the region. Originally called Desikanathapuram after the main deity of this temple, the place also has the name Soorakudi / Surakudi. There are two reasons for this. The first is that the place got this name because of the extensive forests of the Soorai scrub that used to grow here (and can still be seen fairly ubiquitously) in the region. The Soorai scrub is also said to have medicinal properties. The other is that this place was called Suryakudi (see below) which got corrupted to Soorakudi.

This name Suryakudi is connected to the sthala puranam of the temple, according to which, after being vanquished by Veerabhadrar at Daksha’s yagam, Suryan visited various temple to have the wrath of Lord Siva removed. This is one of the places he worshipped Siva at, and so over time. the first worship offered at this temple is to Suryan, which gave the place its name.

When the Nagarathars moved from various places (read our feature on Nagarathar heritage for more) to the Chettinadu region, the ruling Pandya king Soundara Pandyan granted the immigrants nine villages over a period of time. These eventually became the focal points of the 9 Nagarathar temples today. There are two timelines to this story – one is that these were given in the early 8th century CE, while another trail of thought indicates it may have been much later (specifically in the year 1302 CE, since the record refers to the Kali Yuga year 3819). This is the same year in which the village of Velangudi (also one of the 9 Nagarathar temples) was granted to the Nagarathar community.

The original temple is said to have been here since the 7th or 8th century CE, though the structural temple we see today is more recent in terms of style and architecture, with significant Nagarathar influence as can be seen across temples in the Chettinadu region.

The east facing temple has a tank to the immediate east, and a mandapam between the Teertham and raja gopuram. The maha mandapam is at an elevation, and houses the dhwajasthambam, bali peetham and Nandi. Similar to the style in some of the other temples in this region, Nandi’s pedestal is supported by four yalis, which is rather interesting and unusual.

In the koshtam are Nardhana Vinayakar, Dakshinamurti, Lingodhbhavar, Brahma and Durga. In the prakaram are the 63 nayanmars, followed by Vinayakar, Siva as Chandrasekharar with Amman, Murugan with his consorts Valli and Deivanai, Gajalakshmi, Saraswati, Natarajar sabhai, Bhairavar, Suryan and Chandran. There is a separate Navagraham shrine. Despite the relative newness of the temple, the architecture is sound and represents various celestials as well as scenes from puranams.

The most interesting aspect of the temple is Amman’s iconography. Avudai Nayaki Amman is depicted as Siva-roopam, with three eyes and eight arms. Another interesting aspect here is the depiction of Bhairavar with a club rather than the usual trident. While Bhairavar worship is a strong feature in the Chettinadu region, Bhairavar Janmashtami is celebrated here with great festivities, on the day of theipirai Ashtami (8th day of the waning moon) in the Tamil month of Margazhi (December-January).

The temple also has some unusual or unique customs. As Bhairavar here is one of the chief deities in this temple, the deepam (karpoora harathi) shown to the moolavar and Amman is not shown to devotees; instead devotees are able to touch the harathi done to Bhairavar. Also, Bhairavar takes the place of Chandikeswarar during the pancha-murti processions of the temple.

Please also read this overview on Nagarathar heritage and temples, to get a wider view of temples in the Chettinadu region.