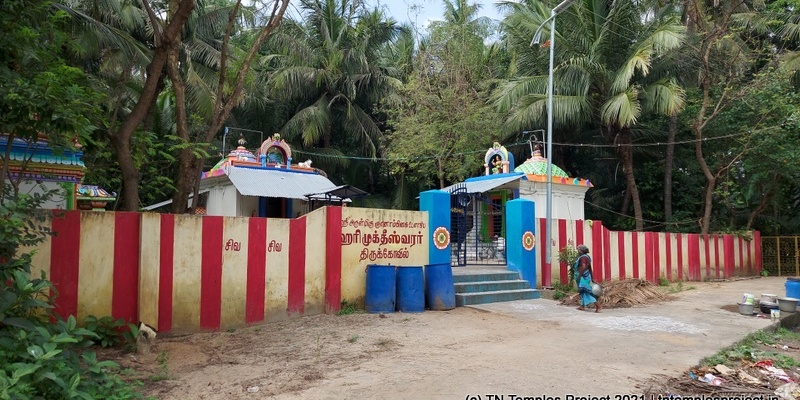 In addition to being a Tevaram Vaippu Sthalam that finds mention in one of Sambandar’s pathigams, the temple is also one of the Chakrapalli Sapta Sthanam temples, which are about the sapta matrikas worshipping Siva at seven different places. At this temple, Maheswari worshipped the river Ganga that flows on Siva’s (Siva Ganga darsanam), and this is celebrated on the 2nd day of Navratri.

The name “Ariyamangai” is an evolution / corruption of Hari-Mangai. Hari refers to Vishnu. Lakshmi wanted to always be beside Vishnu, and so She came to worship Siva here. Surviving only the fruit of the nellikkai (gooseberry) tree (this place once used to be a forest of nelli trees, which is also the sthala vriksham of this temple), she performed her penance here for aeons. Pleased with Her devotion to Her husband Vishnu, Siva granted Her Her wish. So, the place came to be called Hari-Mangai, referring to Lakshmi. The additional local puranam is that Vishnu also came her to worship Siva, to thank Him for allowing Lakshmi to be by His side forever. So Siva here is called Hari Mukteeswarar.

In the puranam of the Chakarapalli Sapta Sthanam temples are Nada Sarma and Anavidya – a couple who also worshipped at all the 7 temples and were blessed with the vision of Parvati in various forms. At this place, She gave them the form of an adolescent girl.

The temple’s Teertham – called the Satya Ganga Teertham or Hari Teertham – is said to be the water that flowed from Siva’s tresses, when Parvati and Maheswari worshipped here.

The temple’s structural layout and iconography is quite different from other temples. The temple’s Teertham is located a little to the east, and needs to be passed by to reach the temple. The entire temple is constructed at an elevation of 2-3 feet from ground level. This place is said to have been a much bigger temple complex in the past, however it is reduced to just a few small shrines now.

At the time of our visit in December 2021, the old temple had been recently renovated.

There is no gopuram, dhwajasthambam or bali peetham. Instead, beyond the entry gate is a small Nandi mandapam, following which is the east-facing garbhagriham for the moolavar. Amman’s south-facing shrine is to the right. Flanking the garbhagriham are Vinayakar and Murugan in small, separate shrines. There is no mandapam here, and so all the other shrines are in the prakaram around the moolavar shrine.

On our left, facing north, are two shrines. The first is for Vishnu as Udeekshraja Perumal with His consorts Sridevi and Neeladevi. The second shrine is for Ayur Devi.

Ayur Devi is regarded as the Empress of the Universe, and a manifestation of Parasakti – the universal and all-pervading Sakti, and the primordial life force of everything in the universe. The active worship of Ayur Devi is said to have been in vogue during the Satya / Krita yugam. The iconography of Ayur Devi is written in our agamas and puranams, and is unique like nothing else. On seven of Her hands are seven sages seated individually, on Her eighth are Gargini Devi and another rishi who are consecrated together in a pot of nectar – together these eight hands are called “Kara Peethams”.  Her ninth hand is in abhaya hastam, blessing devotees.

Then, facing east is the absolutely unique shrine for Anjaneyar with Swarsalamba. It is very rare to see Anjaneyar with his consort. As we come around in clockwise direction, there are shrines for Chandikeswarar and then Durga. There is a separate shrine for the sapta matrikas, given their important connection to the temple.

Reaching the temple is a little difficult, and those with mobility issues may find it quite hard. One has to go through open land and fields, and park their vehicles at a particular point, and then walk from there, through a portion of the fields, before reaching the village.