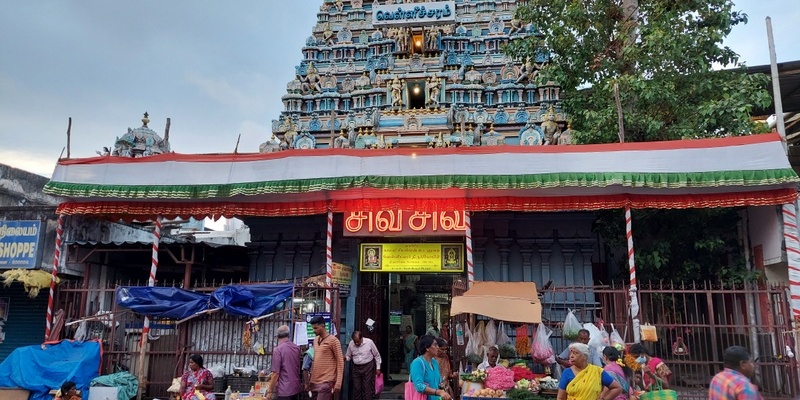 There are 7 temples in the Mylapore suburb of Chennai, which together are regarded as a group, called the Tirumayilai (or Mylapore) Sapta Sthanam. This temple is regarded as the third in that list.

This temple’s sthala puranam is related to the Vamana Avataram of Vishnu. When king Mahabali was going to offer water to Vishnu disguised as the young Vamana, his Guru Sukracharya realised it was indeed Vishnu coming to end Mahabali’s plans. So he took the form of an insect and entered Mahabali’s kamandalam spout, to ensure water does not flow out, after which the king would have offered Vamana whatever the latter wanted. But the all-pervading Vishnu realised this, and used a darbha grass to free up the spout. This grass poked Sukracharya’s eye, making him blind. Later, repenting his actions, Sukracharya sought Vishnu’s pardon, to which he was advised to worship Siva in various places. This is one of the places where he consecrated a Lingam and worshipped it. Sukracharya is associated with the planet Sukran (Venus), also called velli in Tamil. So Siva here is known as Velleeswarar.

Because of the sthala puranam involving Sukracharya, this temple (and all other Velli sthalams) is a Sukra dosham parikaram stahalam, and devotees worship here to be rid of eye-related problems and diseases.

Mylapore is the avatara sthalam of Vayilar Nayanar, one of the 63 Nayanmars, and also of Peyazhvar (one of the 12 azhvars in the Vaishnavite bhakti tradition). It is also often regarded that Tiruvalluvar was born in Mylapore, though there is evidence that he certainly lived in Mylapore.

Sage Angirasa – one of the 7 Sapta Rishis – is also believed to have worshipped here.

Although there are no records specific to this temple to attest to its age, it is generally regarded that this temple is structurally of the same age as the nearby Kapaleeswarar temple. There are problems with this theory, since the question would be…Which Kapaleeswarar temple! That’s because the Kapaleeswarar temple was originally by the shore (near modern-day Santhome), and was moved to its current location only in the middle of the 16th century.

The temple faces east, but the main entrance today is through a raja gopuram on the south. This entrance leads straight to a shrine where Vinayakar is uniquely depicted standing, with his consorts Siddhi and Buddhi. The other uniqueness is of Vinayakar facing south, which is rarely found. (There is one view that this was the original temple – for Vinayakar and His consorts, but there is nothing to support this view.)

On the left, facing east, is the garbhagriham of the moolavar – Velleeswarar – and as we face Him, to the right is the shrine for Kamakshi Amman. The moolavar Lingam is right under the temple’s sthala vriksham, the Kurundhai tree. In the Amman shrine is a Sri Chakram installed by Kanchi Maha Periyavaa.

In the garbhagriham koshtam are Vinayakar, Dakshinamurti, Lingodhbhavar, Brahma and Durga. the Chandikeswarar shrine is also present. In the prakaram are Vinayakar, Murugan with his consorts Valli and Deivanai, Siva Suryan, Saraswati, Lakshmi, Somaskandar, Sapta Matrikas, Veerabhadrar, and Siva as Annamalaiyar with Unnamulai Amman, and vigrahams of the Tevaram saints. There is also a separate Natarajar sabhai and a shrine for Bhairavar. On the eastern side of the temple is a separate, gold-plated east-facing shrine for Sarabeswarar, who quelled the anger of Narasimhar after Vishnu’s Narasimha avataram was completed. Opposite this is a separate shrine for Sani. In this area is also a shrine for Pratyankara Devi, and a depiction of Sukracharya worshipping Lord Siva. This is also where we find the dhwajasthambam, indicating that at one time, the temple’s entrance would have been from the east.

The temple is also the Sukra sthalam amongst the set of temples regarded as Chennai Navagraham sthalams.

The Mylapore sapta Sthanam consists of