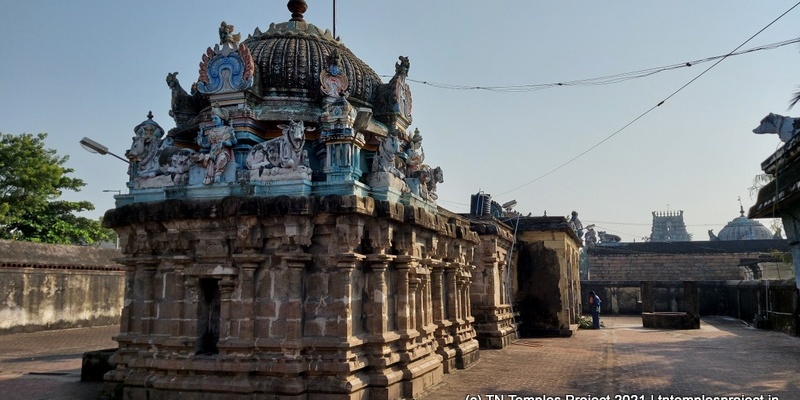 This Tevaram Paadal Petra Sthalam is best known for its association with Tirugnanasambandar (or Sambandar), one of the 3 Tevaram saints along with Appar and Sundarar, and one of the 63 Nayanmars.

Sambandar’s life story started in his birthplace of Sirkazhi, where one day he was fed directly by Parvati. The Goddess similarly played a key part in the last stages of his human birth. Achalpuram – also called Tirunallur Perumanam, because it was part of the nearby Nallur village earlier – is the place where Sambandar attained union with Lord Siva. The event took place on the day of his wedding, which, going by the events that preceded it, made Sambandar realise this too was the Lord’s play.

Going around the fire at his wedding, Sambandar made a vow to continue serving the Lord, while all the time thinking he would attain the Lord’s holy feet. At that time, Parvati is said to have appeared on the scene and distributed vibhuti to all those present – these included Sambandar, his wife Stotrapoornambal, their families, 3 other Nayanmars (Neelanakka Nayanar, Neelakanta Yazhpanar, Muruga Nayanar), and all those who had come to attend the wedding. Then, Lord Siva emerged in the form of an eternal flame (Jyoti) and welcomed Sambandar.

The saint Sambandar sang his last pathigam – Kadhalagi Kasindhu Kannurugi – and merged with Siva, as did all others present there. Even today, this holy event it celebrated every year on the day of moolam nakshatram in the Tamil month of Vaikasi (May-June). This is also the only temple where Sambandar is depicted with his wife.

Because Parvati appeared at the wedding and distributed vibhuti prasadam, She is named Tiruvenneetru Umai or Vibhuti Kalyani. There is also no kumkumam given out at this temple, and a separate vibhuti prasadam is handed out to devotees at the Amman shrine.

Parvati is regarded as the universal Mother – Achal or Ayal – and so the place is called Achalpuram.

Because of the story of Sambandar at this temple, and the fact that three other Nayanmars also attained mukti here, this place is regarded as a superior mukti sthalam. There is a matham called the Tirugnanasambandar Matham to the north of the temple.

Sage Kagabujandar (for whom a separate temple has been erected, close to the Siva temple) walked on his head and hands, as he considered the place so sacred that he refused to place his feet on the ground here.

The river Ganga is said to have worshipped at the entrance of this temple.

The architecture here is unlike most other temples. There is a 100-pillared mandapam in the outer prakaram, filled mostly with images of Sambandar and Stotrapoornambal. The temple also has 11 teerthams (temple tanks), of which the Panchakshara Teertham opposite the eastern entrance is the main one.

The temple was built in the time of the imperial Cholas, but over a long period. Inscriptions in the temple speak of donations made by Rajendra Chola I, Kulothunga Chola I, Raja Raja Chola III and Maravarman Parakrama Pandyan. The Amman shrine – always a later addition – is reckoned to be from 1210 CE.

There is also a separate shrine for Rna Vimochana Lingam, which when worshipped on Mondays, is said to relieve one of debts (read about Saraparameswarar here). Worshipping at this temple is said to cure devotees of all illnesses, free them from debt and enhance wealth, and ensure the longevity of the husbands of women devotees.

In the koshtam are Nardhana Vinayakar, Dakshinamurti, Lingodhbhavar, Brahma and Durga. In the inner prakaram, on the south is a row for the 63 Nayanmars. Thereafter there are shrines for Vinayakar, Murugan with his consorts Valli and Deivanai, Rna Vimochana Lingam, Mahalakshmi, Chandikeswarar, Bhairavar and Sattanathar. Several inscriptions can be seen on the walls of the inner prakaram. The utsava murtis are fascinating pieces of sculpture. In the prakaram, there is a bas relief of Nardhana Vinayakar, but it is not a standalone piece of work. An entire temple for Vinayakar has been carved in bas relief, making this a spectacular piece of Chola architecture.

In the outer prakaram is a shrine for Vinayakar, Murugan with his consorts Valli and Deivanai, and a separate east facing shrine for Amman. The Amman shrine is itself built like a separate Siva temple with its own bali peetham, Nandi and even a kannimoolai Vinayakar, and also an inner bali peetham and Vinayakar in front of the garbhagriham. The overall architecture of the temple, and particularly the Amman shrine, is exceptionally stunning.