This temple is believed to have existed across the four yugams. Nagapattinam gets its name from Naga, ie, Adiseshan the serpent, who worshipped Siva and Vishnu here in krita / satya yugam. Previously it was a forest called Sundararanyam, through which ran the Vritha Kaveri river (a tributary of the Kaveri river, today known as Odampokki). In the treta yugam, Dhruva heard about this place, obtained darsanam of Vishnu after much penance. It is said that the temple came into existence after this. Bhudevi also worshipped here in the treta yugam. Following Dhruva’s example, sage Markandeyar did the same in dwapara yugam, and the Chola king Saleesugan worshipped here in kali yugam (and even got married at this temple).

Vishnu is believed to have appeared on the day of Masi Magham on the banks of the temple’s tank – Sara Pushkarini – looking resplendent with His skin glowing like gold. He therefore came to be called Soundara Rajan or Nagai Azhagan. Two eunuchs, Kandan and Sukandan, became full-grown men after taking a bath in the Sara Pushkarani. (It may be that the two dwarapalakas – Sumba and Nigumba – were Kandan and Sukandan after their change in form.)

According to the Brahmanda puranam, a local princess had a third breast due to a curse, which would disappear upon her sighting her future husband. This happened as soon as she saw Saleesugan, the Chola king, who had come here to worship Vishnu. She then married Saleesugan here. (This story is similar to that of the Madurai Meenakshi-Sundareswarar wedding.) Vishnu is believed to have given them darsanam in all three kolams. Saleesugan is said to have built the first man-made temple here.

It is possible that the early version of this temple is from Pallava times. However, the structural temple as it stands today is Chola, from the late 8th century, and there are two inscriptions in the temple from the Chola period. Subsequent additions and contributions have been made by the Thanjavur Nayaks and Thanjavur Marathas. At the request of the Dutch settlers here, a Nayak king of the time is said to have built the rajagopuram for this temple to also serve as a lighthouse.

There are some interesting architectural and iconographic aspects in this temple from the early part of the medieval Chola period. It is one of the rare temples where Lord Vishnu is present in all three kolams (nindra kolam as Soundara Raja Perumal or Neelamegha Perumal, amarndha kolam as Govinda Raja Perumal, and sayana kolam as Ranganatha Perumal) in the same temple premises. Garudar (Periya Tiruvadi), unusually, is seen seated. Ashtabhuja Narasimhar is seen simultaneously in two forms – Dushta Nigrama (destroying the evil) and Sishta Paripalanam (taking care of the young). He is depicted as blessing Prahaladan with one hand in Abhaya hastam, and destroying Hiranyakashipu with the other arms. Unusually, Ashtabhuja Durga is also enshrined in the temple.

The temple’s annual festivals include the Panguni Uthiram festival where the marriage of Soundararaja Perumal and Soundaravalli Thayar is celebrated. In the Tamil month of Aadi (July-August), as part of the festival, the Lord is brought to the vasanta mandapam to listen to the works of his special devotee, Tirumangaiazhvar.

The other important temples in Nagapattinam are the beautiful Kayarohaneswarar temple (which is also part of a set of 12 Siva temples in and around Nagapattinam that are considered as one group), and the Naganathar temple. It is possible to visit all of these temples in one day (not a festival day or holiday), with an efficient travel plan, but will be a bit of a stretch. 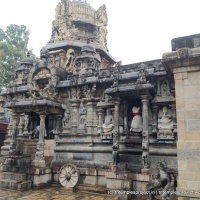 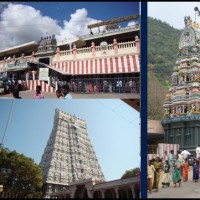