Skip to content
Paadal Petra Sthalam where Parvati is present but formless, in the sanctum

Nedunkalam is located about 21km from Trichy and 40 km from Thanjavur, off the Trichy-Thanjavur highway.

Sakti / Parvati meditated on Lord Siva in this place in order to be married to Him. The Lord came here in the form of a thief, and held Her hand. A frightened Parvati went and hid herself in a forest of Thazhai trees, called Olimathicholai. Naturally, one cannot hide from the supreme Lord! He found her, and granted Her wish by taking Her with Him to Kailasam. This place, among others, is also considered and called Dakshina Kailasam.

Somaskandar, the utsava murti, is seen without one toe. Legend has it that the Lord stood in disguise as witness, to save a disciple. The king who was meting out justice, cut off the toe of the witness.

Sundareswarar is an eponym of Siva in the form of a groom at His wedding. The Lord gave a Chola king – Vankiya Chola – a vision of His celestial wedding with Parvati. So the Lord is considered to be present as a groom here, and is therefore called Nitya Sundareswarar.

The garbhagriham has two vimanams. It is believed that after Siva gave his left half to Sakti, he moved / slanted slightly to the right, to give space to the Goddess. Parvati stayed in the moolasthanam but in invisible form, and so there are two deities in the garbhagriham. This explains the two vimanams, and Kasi is the only other place with such a two-vimanam garbhagriham. There is also a separate shrine for Parvati at this temple.

In what is a unique custom here, devotees offer pomegranates to the Lord for abhishekam.

Arunagirinthar has sung about Murugan here, in the Tiruppugazh. This is one of the temples where Agastyar has worshipped, and there is a shrine for the sage in the temple. The temple also features in the venba of Aiyadigal Kadavarkon Nayanar.

This being a Chola era temple, there is exquisite architecture and sculpture work here. Dakshinamurti here is Yoga Dakshinamurti – a beautiful exposition of sculpture – who is seen with a yoga pattam, and also holding the axe and deer in the two rear hands, a bowl of vibhuti in one of the front hands and the other front hand shows the chinmudra. Notably, the carvings on the raja gopuram depict the various aspects stated in Sambandar’s Tevaram pathigam on this temple. There is also a Sirpa Ural, a decorated mortar with its own pestle, which features amazing sculpture work.

There is a separate shrine for Vishnu as Varadaraja Perumal, with Upa-Nachiyars. Uniquely, all Navagrahams here face inwards, ie facing Suryan, who is the only deity in the Navagrahams who is present with his consort – in fact, both consorts. Another interesting aspect here is that there is a shrine for Varahi, who is worshipped specifically by devotees from Kongu Nadu (Coimbatore region).

This is a Chola temple from the late 9th / early 10th century, with subsequent additions by other Chola kings and also by other dynasties. Inscriptions in the temple date back to the reign of the Chola kings Parakesari Varman, Raja Raja Chola I, Raja Raja Chola III, Kulothunga Chola III and Aditya Karikalan II, as well as the Pandyas, Hoysalas and the Vijayanagara dynasty, who would likely have contributed to the temple in some fashion.

Our visit to this temple was on a rainy evening, which explains the low-quality pictures below. 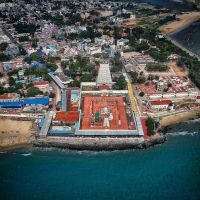 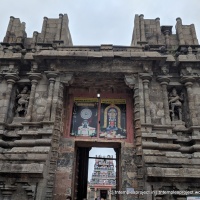 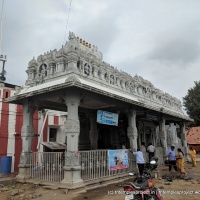 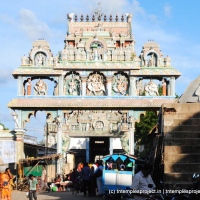 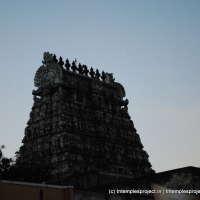 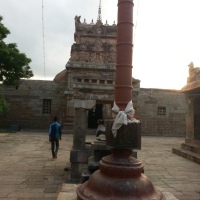 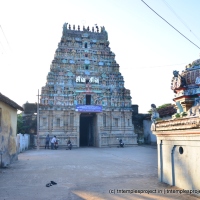 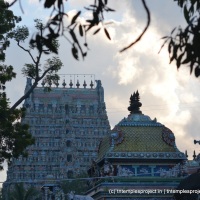