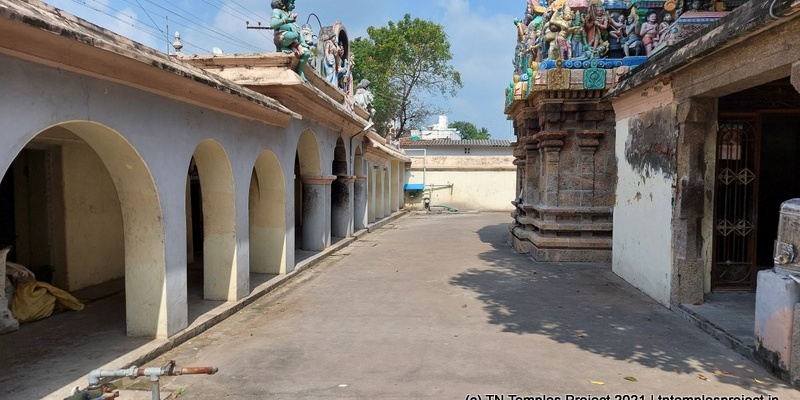 This is one of 12 temples directly associated with the origin of Kumbakonam and the Mahamaham festival. According to that puranam, Brahma put together the seeds of all living organisms and also the Vedas and Puranas, in a pot which came to be called the Amrita Kalasam (pot of nectar). Kumbham is the Sanskrit and Kudam the Tamil, for a pot of this type. This was decorated with various items like flowers, vilvam, auspicious cloth, chandanam (sandal paste), and sacred thread, a coconut was kept on top of it. The whole thing was tied together, similar to the kalasams we see today at domestic functions and in temples. The pot was kept on the top of mount Meru. When the pralayam began, it destroyed all creatures on earth. The Kumbham prepared by Brahma was also displaced, and floated on the flood waters for years and years. Finally, it settled at a spot (which is regarded as modern day Kumbakonam). Siva, in the guise of a hunter, broke open the kumbham with his bow and arrow (banam, in Sanskrit). The chandanam adorning the kumbham fell here. (Read the full story of the origin of Kumbakonam, and about the related Mahamaham festival.)

There are two versions for the name of the moolavar here. This is regarded, by some accounts, as one of the three places where the three pieces of the Meru mountain that fell to earth, when Adiseshan and Vayu had a show of strength to prove who was stronger. This is the same sthala puranam associated with the Kalahasti temple near Tirupati. It is said that Rahu worshipped here, as he did at Kalahasti which is also a Rahu sthalam.

Another version is that the Lord here is not Kalahasteeswarar, but Sri-kala-hasteeswarar. The name has no connection to Kalahasti; instead, Sri refers to a spider, kala to a snake (which may or may not be a reference to Rahu), and hasti, an elephant – all three of them worshipped Siva here, which is what gives the moolavar His name.

In addition, it is said that Rahu also worshipped here. Therefore, although this is not one of the Kumbakonam Navagraham temples, this temple is considered a Rahu and Ketu parihara sthalam.

Originally, the temple was a small one, built in the late Chola period. The temple was significantly expanded and renovated in the 17th century during the Nayak period, under the rule of Serfoji I. It is recorded in inscriptions, that this rebuilding was done for the convenience of the then peetadhipati of the Kanchi Mutt, which has one of its headquarters in Kumbakonam.

Among the utsava murtis at this temple is one of Siva as Kalyana Sundareswarar, preparing to leave for the Kasi Yatra (followed in many weddings even today). He is holding a walking stick, while Parvati can be seen holding on to the other end of the stick, to prevent Him from leaving! The wedding celebrations of Kalahasteeswarar and Katyayani Amman are celebrated annually on the day of Makara Sankranti. Amman receives special rahukalam puja every day.

Durga – named Ashta Dasabhuja Mahalakshmi Durga – is depicted with 18 arms, and is regarded as the adipathi of Rahu.

Interestingly, there is a separate shrine for Siva as Jwarahareswar, and worshipping Him is said to relieve one of all fears and illnesses. Devotees offer boiled rice and pepper rasam as their offering to Jwarahareswarar, who unusually is seen with three legs – two on the ground, and one folded. These three legs are said to represent the three parts of the human body – bones, veins and skin – which is where all diseases spread to. Abhishekam to Jwarahareswarar is performed with hot water.

There is also a separate shrine here for Manikkavasagar, in addition to the Tevaram moovar shrine.

Although this is not one of the Kumbakonam Navagraham temples, this temple is considered a Rahu and Ketu parihara sthalam.

It is believed that this place has equivalence to the Kalahasti temple (Paadal Petra Sthalam) near Tirupati, and is often referred to as Then Kalahasti. Further, this place along with the nearby Oppiliappan Koil are regarded as a similar set to Tirupati-Kalahasti.