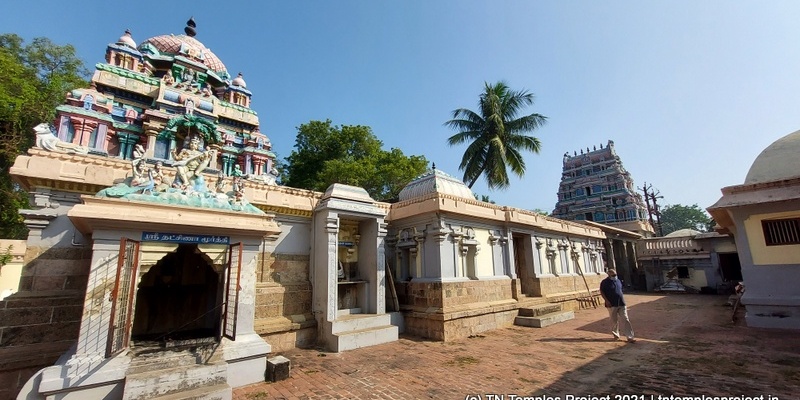 This is one of 12 temples directly associated with the origin of Kumbakonam and the Mahamaham festival. According to that puranam, Brahma put together the seeds of all living organisms and also the Vedas and Puranas, in a pot which came to be called the Amrita Kalasam (pot of nectar). Kumbham is the Sanskrit and Kudam the Tamil, for a pot of this type. This was decorated with various items like flowers, vilvam, auspicious cloth, chandanam (sandal paste), and sacred thread, a coconut was kept on top of it. The whole thing was tied together, similar to the kalasams we see today at domestic functions and in temples. The pot was kept on the top of mount Meru. When the pralayam began, it destroyed all creatures on earth. The Kumbham prepared by Brahma was also displaced, and floated on the flood waters for years and years. Finally, it settled at a spot (which is regarded as modern day Kumbakonam). Siva, in the guise of a hunter, broke open the kumbham with his bow and arrow (banam, in Sanskrit). The sacred thread tied around the kumbham fell here. (Read the full story of the origin of Kumbakonam, and about the related Mahamaham festival.)

Sage Gautama came to Kumbakonam, and worshipped Siva at various temples. He was very fond of cows, and would tend to them with great care, love and affection. However, there were some asuras who did not like the sage, and in order to create a stain on his character, they created a magical cow and sent it to appear before the sage. As the sage started caressing this cow, it vanished. The sage was overcome with disappointment, as he believed he had caused the end of a cow, and that the sin of pasu-hatya dosham had attached to him. So he worshipped Siva here. the Lord directed Sage Gautama to bathe in the Mahamaham kulam, which is located nearby, thereby disillusioning the sage of his perceived sin. As a result of this, Siva here is called Gautameswarar.

Arising from the sthala puranam involving sage Gautama, this is a parihara sthalam for those who have had any sort of connection with the death of a cow. Further, it is regarded that donating a cow to this temple will bring a lot of wealth and prosperity to the donor.

This temple is of particular specialty for those born under the vrischika rasi, who are said to greatly benefit by worshipping here. Bhairavar worship at this temple on Ashtami days, is said to give devotees relief from fear. A special puja takes place here during rahukalam time (4.30 to 6 pm) on Sundays.

While the core temple and the garbhagriham is from the Chola period, much of the rest of the temple is from the Nayak period in the 16th century. The unassuming entrance gives way to a fairly extensive and comprehensive temple inside, with shrines for all parivara deities, as well as Bhairavar and Anjaneyar.