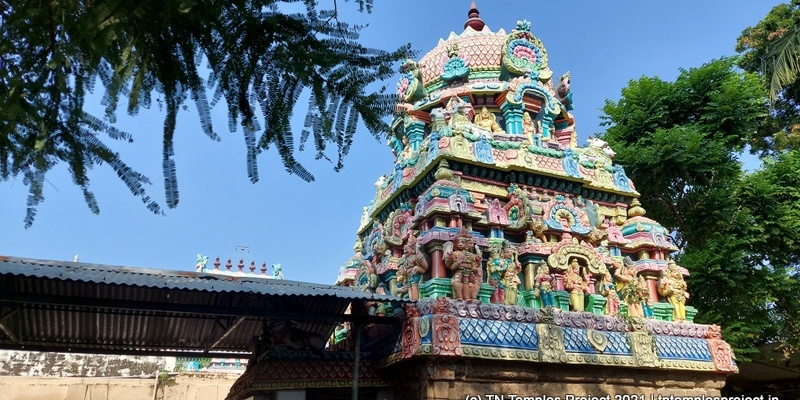 This is one of 12 temples directly associated with the origin of Kumbakonam and the Mahamaham festival. According to that puranam, Brahma put together the seeds of all living organisms and also the Vedas and Puranas, in a pot which came to be called the Amrita Kalasam (pot of nectar). Kumbham is the Sanskrit and Kudam the Tamil, for a pot of this type. This was decorated with various items like flowers, vilvam, auspicious cloth, chandanam (sandal paste), and sacred thread, a coconut was kept on top of it. The whole thing was tied together, similar to the kalasams we see today at domestic functions and in temples. The pot was kept on the top of mount Meru. When the pralayam began, it destroyed all creatures on earth. The Kumbham prepared by Brahma was also displaced, and floated on the flood waters for years and years. Finally, it settled at a spot (which is regarded as modern day Kumbakonam). Siva, in the guise of a hunter, broke open the kumbham with his bow and arrow (banam). The coconut kept on top of the kumbham fell here. (Read the full story of the origin of Kumbakonam, and about the related Mahamaham festival.)

The Mahamaham tank – spread over nearly 20 acres and dotted with shrines for Siva along its border and corners – is regarded as a confluence of nine rivers / river Goddesses, Ganga, Yamuna, Saraswati, Narmada, Godavari, Krishna, Tungabhadra, Kaveri, and Sarayu. According to the Periya Puranam, on the day of the Mahamaham festival, these nine rivers rejuvenate themselves.

Once, the nine rivers (represented as nava-kannikas) had a complaint, that they were getting polluted by the sins that devotees sought to wash away, by bathing in these rivers. The river goddesses themselves therefore wanted to be cleansed. They worshipped Siva at Kasi, and were directed to bathe in the Mahamaham kulam, before proceeding to the Aadi Kumbeswarar temple, and at the Kasi Viswanathar temple, where Siva as Viswanathar from Kasi, manifested Himself.

At the Mahamaham kulam, they noticed that there was a Siva temple to the east of the tank, but as is the case most times, the deity was facing east. The nava-kannikas requested Him to turn around so they could worship him while still being immersed in the tank. Siva obliged, turning His visage to the west. Abhi-Mukham in Sanskrit means turned-face, and hence Siva here is called Abhi Mukheswarar (not Abhi Mukteeswarar).

In addition to being west-facing, this temple is interesting for its unusual iconography.

In the main garbhagriham, between Abhi Mukheswarar and Amritavalli Amman, is a separate shrine for Adi Poora Amman.

There are beautiful murtis in the koshtams, including Yoga Dakshinamurti (a specialty of this temple) and Ardhanareeswarar, which are spectacular examples of Chola architecture.

Amongst the 12 temples associated with the story of Kumbakonam, this temple features the largest Bhairavar murti – that of Swarna Bhairavar. Also, in the Navagraham, Sani is taller than the other deities, which is another specialty here, and because of this, this temple is a Sani dosham parihara sthalam.

The original temple is from the Chola period, but most of the structural temple today is from the Nayak period, built by Govinda Dikshitar, a minister during the reign of Achyuta Nayakar of Thanjavur.