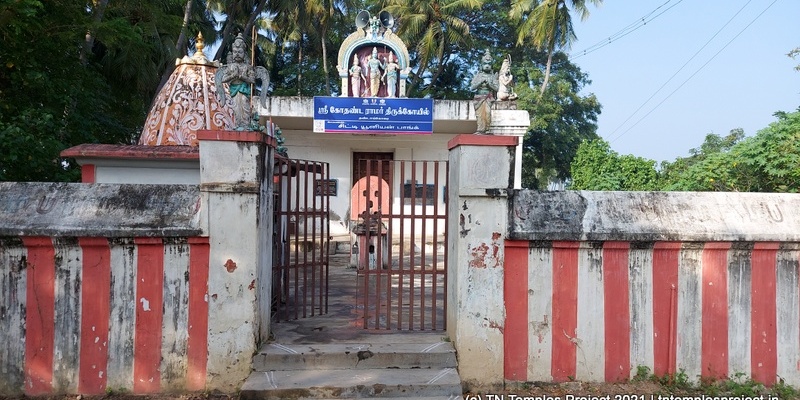 The original name of this village was Thandankurai, which has come to be known as Thandaangorai over a period of time. The name Thandankurai is likely connected to the Tevaram pathigam connected with the Kailasanathar Siva temple in this village.

Thandangorai may well be regarded as the land of yagams, learned brahmins and proficient vedic pundits. The village used to be (and to some extent continues to be) inhabited by a number of vedic scholars.

One of these was a local person called Appadurai Deekshitar (also called Appayya Dikshitar, due to his proficiency with conducting yagams), an exponent in performing yagams, who is best known for having performed three Garuda Sayana Yagnas (which are reckoned to be among the most difficult ones to perform), for which he was honoured by Kanchi Maha Periyavaa.

The Garuda Sayana yagam is difficult for many reasons. Firstly, it involves using 365 stones – one for each day of the year – of the exact same thickness but different shapes, which are all specified. It needs to be done without any interruption; if even for a day there is any stoppage, what was done prior is invalidated and is of no benefit.

Appardurai Deekshitar was a local brahmin, from a poor family. Nonetheless his erudition and vedic prowess enabled him to conduct the yagam thrice, as if once was not sufficiently difficult. It is said that he would finish one day’s yagna and leave, and somehow, funds for the following day’s proceedings would invariably arrive from some source or the other.

The main temple is a one-room mandapam with Kodandaramar as the moolavar, present with Sita Piratti and Lakshmana, in the garbhagriham. At the entrance is a bali peetham and the Garuda shrine. On the left, is a separate shrine for Anjaneyar. There is also Vinayakar shrine for Thumbikkai Azhvar, at to the left of the mandapam entrance. The temple itself is nestled amongst tall coconut trees which, with other trees, provides a beautiful canopy for the temple. There are no other shrines in the prakaram.

Today, the temple is located at the end of the Agraharam street, after the Kailasanathar temple. This used to be a full-fledged Agraharam with the Siva temple (located further away from its current location) in the middle, and four “mada” streets in the four cardinal directions.

This temple did not always exist as a Kodandaramar temple, but was for another deity form of Vishnu. Uniquely and interestingly, this is also one of the very few villages that has, or is able to identify, a nakshatram (birth star) for the village itself! In the case of Thandangorai, its grama nakshatram is Swati. For this reason, it is possible that the Perumal temple that once existed here, could have been a Lakshmi Narasimhar temple (since Narasimhar’s janma nakshatram is also Swati).

The village is also noted for the Mummurti Vinayakar temple nearby (read here), as well as a Pidari Amman temple for Ooradachi Amman. Interestingly, this Pidari Amman is the kula deivam (family deity) for most of the brahmins in this village. Opposite the Vinayakar temple is also a jiva samadhi for Sri Sachidananda Swami, a saint and mystic who made this place his home and eventually attained mukti here.