Kulithalai is located west of Trichy near Musiri, on the highway to Karur.

Dhoomralochana, the demon, was terrorizing the devas, who sought refuge in Parvati / Ambika. She fought on their behalf, but grew tired. To support her, Lord Siva deputed the sapta kannikas to fight him. Unable to withstand their onslaught, Dhoomralochana hid in the hermitage of Sage Katyayana. The sapta kannikas mistook the sage for the demon, and killed him, resulting in brahmahathi dosham attaching to them. Parvati advised them to pray to Lord Siva, and after their penance, He granted them relief from their sins, and also gave them pratyaksham from the Kadamba tree at this temple, which was a forest of Kadamba trees. This also gave the Lord his name – Kadamba Vaneswarar. The sapta kannikas as enshrined in the sanctum behind the Lingam.

Murugan also prayed here to be relieved of the sin of killing Soorapadman. At this temple, Murugan, along with Valli and Deivanai, are enshrined along with the Navagrahams. It is believed that Murugan established the Lingam here, as well as at four other places associated with kadambam – Koil Kadambar, Ilankadambanoor and Perunkadambanoor (all in Nagapattinam dt), and, Aadi Kadambar.

This temple is also considered one of the places Murugan prayed at, after he overheard Lord Siva teaching Parvati the meaning of the Pranava Mantram (his curse of becoming mute was relieved at Sivanandeswarar temple at Tirupandurai).

It is said that Sage Agastyar’s desire to be in the presence of Lord Siva was not satisfied, despite him visiting several temples. Finally he reached Kulithalai, where he worshipped Lord Siva in the morning, then headed to worship Ratnagireeswarar at Ayyarmalai (Vatpokki) in the afternoon, and finally Maragadachaleswarar at Eengoimalai in the evening. At this, his desire to see Lord Siva was sated. It is believed that worshipping these three temples in this order on the same day, gives great merit to devotees. That merit is increased if this is done on Mondays in the Tamil month of Kartikai (Novermber-December).

A local king called Muttarasu used to worship the three temples as above. Once he grew old, he was unable to do the circuit of the three temples. So he prayed to Lord Siva to be able to continue his worship as before. Lord Siva came in the king’s dream and asked him to build a temple using three idols lying near the vanni tree at this temple. This is the reason for one of the names of this place – Muttarasanallur. Because the other two temples (Ayyarmalai and Eengoimalai) are difficult to climb for some people, visiting this temple at Kulithalai is considered equivalent to have visited the other two as well.

After the job of creation was completed, Lord Siva was very happy with Brahma (according to some stories, Brahma was tired). Brahma conducted a chariot festival, and also performed penance here for a thousand years, after which Lord Siva gave him pratyaksham and Brahma attained mukti.

Deva Sarma, a staunch devotee, requested Lord Siva to give him the vision of the divine wedding, and so Siva and Parvati presented themselves as Sundareswarar and Meenakshi. For this reason, this place is also called Vada Madurai, and one of the Lord’s names here is Sundareswarar.

This place also has a dasavataram connection. The demon Somukhan took away the four Vedas and hid himself in patala lokam. Lord Vishnu worshipped Lord Siva here before taking the Matsya Avataram, after which the Vedas were duly retrieved. For that reason, this place was also called Vedapuri or Chaturvedapuri.

As part of the annual temple festival, the utsava murtis of Lord Siva and Parvati head to the river Kaveri, at which the deities from the following seven other temples nearby also arrive at the same time:

Unusual as Siva temples go, this is a north facing temple, for which reason it is equated with Kasi.

Arunagirinathar sang at this temple. Muthuswamy Deekshitar’s Kirti Neelakantham Bhaje is sung on the Lord of this temple.

In the Tevaram, this place is called Kuzhithandalai, which has been corrupted to Kulithalai over centuries. This is a Chola era temple, which has largely remained untouched over subsequent dynasties’ rule. However, some recent renovations in the form of brickwork, etc, are visible. 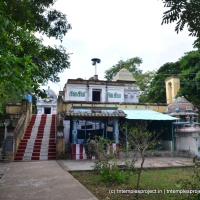 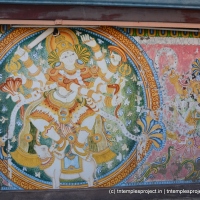