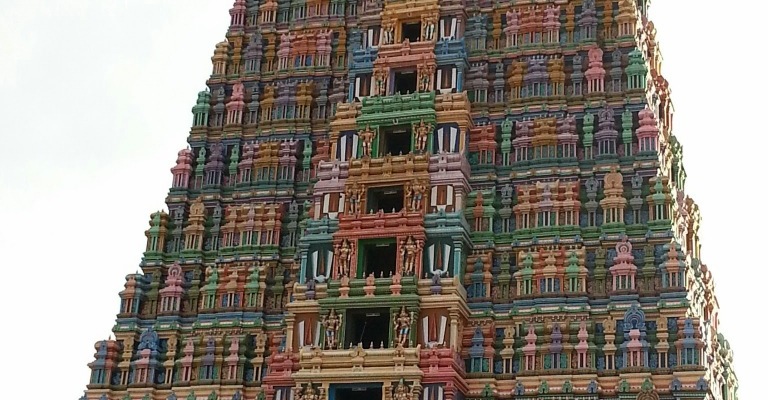 Srivilliputhur is located about 80km from Madurai, on the road to Kutralam.

Srivilliputhur is closely associated with two of the renowned azhvars in the Vaishnava Bhakti movement – Periazhvar and Andal.

Mukunda Pattar and Padmavalli were a couple in Srivilliputhur, devoted to Lord Vishnu in the form of Vatapatrasayi (vata=banyan, patra=leaf, sayi=lying down). Their fifth child – Vishnuchittan – was also a devotee of the Lord, and used to prepare garlands for worship of the Lord at the temple. Once, Vishnuchittan won a contest and received a gold box by the grace of Lord Vishnu, who appeared on Garudan. The townfolk were astonished, and so Vishnuchittan sang a Pallandu which pleased Lord Vishnu. The Lord blessed him, and after this, Vishnuchittan became Periyazhvar.

One day when Periazhvar was gathering flowers in the garden, he found a girl child and took her home, as he and his wife were childless, and named her Kothai, who later came to be known by the local people as Andal. Kothai constantly dreamed of the Lord, and her only wish was to be married to Ranganatha Perumal. She even used to wear the garland prepared for the Lord, and ensure it was fit to offer to the Lord. On one occasion, Periazhvar found a human hair in the garland prepared for the Lord, and knowing it was Kothai’s started preparing another for the Lord. That night, Lord Vishnu appeared in his dream and insisted he would only accept the garland tried out by Kothai!

Kothai, now Andal, sang many pasurams on Perumal, and the day finally came when Lord Vishnu decided to get married to her and told Periazhvar to bring her to Srirangam. When he took Andal to Srirangam, she disappeared in the Kaveri river, as the Lord had taken her to be with him. Periazhvar requested the Lord to come to Srivilliputhur and get married to Andal, again. Accordingly, Ranganathar visited Srivilliputhur as Rangamannar (since he came dressed as a King) and married Andal.

The temple’s rituals follow the traditions established by Andal, and the Andal Puranam is a must read, even if it is considered voluminous. Andal’s Tiruppavai is sung across Perumal temples early in the morning every day in the Tamil month of Margazhi (December-January).

Many of the paintings and sculptures in the temple are from the time of Vijayanagar and Nayak kings who ruled the region at the time.

There are little or no accommodation options here, so one must stay at Madurai (80km), Tirunelveli (120km) or in the Ambasamudram region (100+km).

For those that like south Indian breakfasts, there is a small family-run hotel called Hotel Kadiravan on the main street (kadai-theru), which serves some exceptionally good food.

Srivilliputhur is also famous for its palgova (and of late, other milk-based preparations are gaining currency).