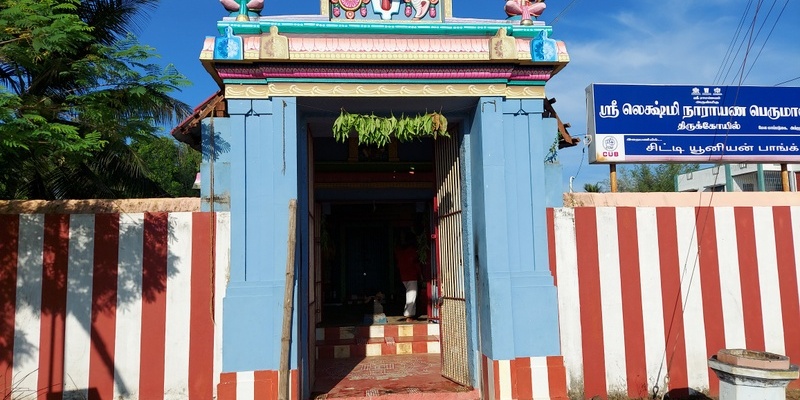 The area of Sholampettai is actually a group of smaller villages including Sholampettai, Ramapuram and Mappadugai. Mappadugai also goes by the name of Pandaravadai. There are several temples in this cluster of villages, including the Tirumeni Azhagar, Chandrasekharar temple and Lakshmi Narayana Perumal at Mappadugai; Azhagiyanathar temple, Thanthondreeswarar temple and Vanamutti Perumal at Sholampettai; and a Siva and Perumal temple in Ramapuram.

The name of the village – Mappadugai – is rather unusual and there are two stories for this. The first is that this place would likely have been a large area of mango trees (maamaram; padukkai means a bed). The other story is much more interesting! It is said that both the Ramayanam and Mahabharatam have taken place at various times in different parts of the country. In the local retelling of the Ramayanam, Ravana engaged his uncle Maricha to take the form of a golden deer to distract Sita and lure Rama into chasing it. Eventually, Rama captured the deer, as it came to rest at this place. This gave the place the name Maan (deer) Padukkai (resting place). Over time, this has corrupted to Mappadugai.

This small but beautiful temple is at the western end of the same street that houses the Siva temple for Chandrasekharar. The temple is said to be about the same age as the Siva temple, ie, about 1300 years. However, it has quite obviously been renovated several times. It is possible that in its day, this was a larger temple that it currently presents itself as.

The entrance arch opens up to a narrow prakaram, followed by a small mandapam that houses a bali peetham and Garudazhvar in the middle, Bala Vinayakar on the left (of the garbhagriham), and Bala Anjaneyar (on the right) in a separate sub-mandapam. Inside is the garbhagriham with the moolavar Lakshmi Narayana Perumal, flanked by His consorts Sridevi and Neeladevi.

The prakaram is reasonably well maintained, and is enclosed by a boundary wall. There are no other shrines in the prakaram.

The interesting Ramayanam story of the kidnapping of Sita by Ravana – part of which also gives Mappadugai its name, as described earlier – is painted on the walls, indicating the history of the place.

It is believed that worshipping Perumal and Thayar here will help resolve all problems of the devotee, and promote the inculcation of good thoughts and behaviours.

Balaji Bhattar and his twin brother manage the temple. They live a few houses down the street, between this temple and the Siva temple, and the locals can be relied to point visitors in the direction of their house, in case the temple is closed.