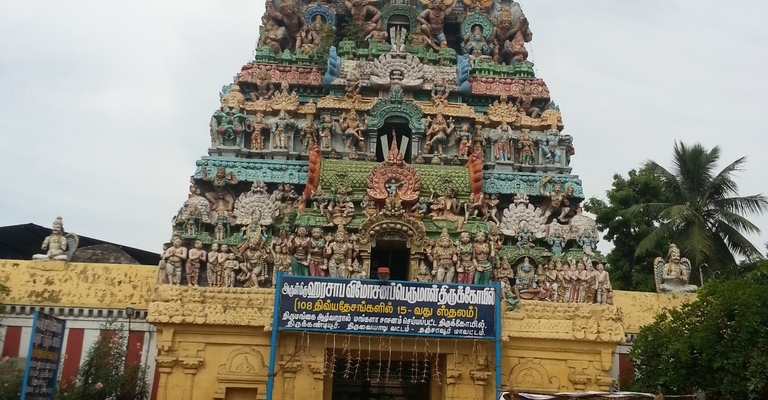 Kandiyur is located almost midway on the road from Thanjavur to Tiruvarur. The Brahma Sira Kandeeswarar temple, which is a Paadal Petra Sthalam and an Ashta Veerattam Sthalam, is located a few hundred meters away.

The name of the place – Kandiyur – is said to come from the fact that Siva’s Brahmahathi dosham was warned (Kandanam in Tamil) at this place. There is also a view that “Kandi” refers to armlets worn during festivals and functions, and this town supplied those for Nandi’s wedding (see Tiruvaiyaru Saptha Sthanam temples). The town is located between Kudamurutti and Vennar rivers.

Of the legends of Bhikshatanar, one is where Brahmahathi dosham attaches to Lord Siva for plucking off one of Brahma‘s heads, as punishment for the latter’s arrogance. The detached skull also stuck to Lord Siva’s palm. After much wandering about seeking expiation for the dosham, Lord Siva worshipped Lord Vishnu and Kamalavalli Thayar at this temple, after which the skull fell off. As the saaba (sin) of Hara (Siva) was relieved here, Perumal gets the name Hara Saaba Vimochana Perumal.

While is referred to as a Mummoorti sthalam, there is no separate temple in the town, for Brahma. However, there is a shrine at the nearby Brahmasirakandeeswarar temple, where Brahma is present along with Saraswati.

According to scriptures, the temple was built by the King Mahabali.

While the current temple and architecture clearly belong to the medieval Chola period in the 8th century CE, the temple itself is said to be from the Krita Yugam and is therefore considered older than the Srirangam Ranganathar temple.

This temple can be visited along with 6 out of 7 Sapta sthanam temples in the region (the 7th being Tiruvaiyaru itself, which is a large temple), in half a day. If one has a full day, it is easy to visit all 7, and this temple as well as a few nearby temples of note.